All That’s Left in the World (Hardcover) 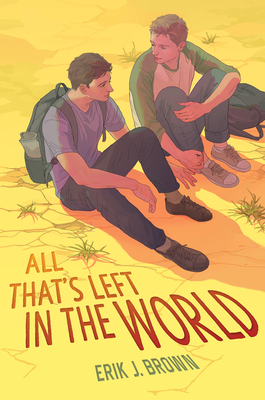 What If It's Us meets They Both Die at the End in this postapocalyptic, queer YA adventure romance from debut author Erik J. Brown. Perfect for fans of Adam Silvera, Alex London, and Heartstopper by Alice Oseman.

When Andrew stumbles upon Jamie’s house, he’s injured, starved, and has nothing left to lose. A deadly pathogen has killed off most of the world’s population, including everyone both boys have ever loved. And if this new world has taught them anything, it’s to be scared of what other desperate people will do . . . so why does it seem so easy for them to trust each other?

After danger breaches their shelter, they flee south in search of civilization. But something isn’t adding up about Andrew’s story, and it could cost them everything. And Jamie has a secret, too. He’s starting to feel something more than friendship for Andrew, adding another layer of fear and confusion to an already tumultuous journey.

The road ahead of them is long, and to survive, they’ll have to shed their secrets, face the consequences of their actions, and find the courage to fight for the future they desire, together. Only one thing feels certain: all that’s left in their world is the undeniable pull they have toward each other.

Erik J. Brown is the author of All That's Left in the World. Erik was selected as a Lambda Literary Emerging Writers Fellow. When not writing genre-blending books for young adults, he enjoys traveling and embarking on the relentless quest of appeasing his Shiba Inu. He lives in Philadelphia with his husband.

"A haunting story that’s sure to delight (and terrify). " — Kirkus Reviews (starred review)

"In allowing the protagonists moments of laughter and warmth amid so much loss, he gets to the terrifying heart of societal collapse: the loneliness and guilt of outliving friends and family—and the resulting hope in connection." — Publishers Weekly

"Brown has somehow achieved a book that is romantic, hilarious, warm-hearted, hopeful, and page-turningly thrilling all at once. I was hooked from beginning to end."  — Dahlia Adler, author of Cool for the Summer

"Tense, exciting, sometimes heartbreaking and always romantic, All That's Left in the World explores what it means to hold onto hope and humanity when the worst case scenario becomes reality. With characters you'll adore, and a fast-paced, mysterious plot that keeps you turning the pages as fast as you can devour them, this book is not to be missed."  — Sophie Gonzales, author of Only Mostly Devastated

“A timeless love story that could not be more appropriate for this moment, All That's Left in the World is a thrilling, heartfelt, and beautifully written debut.” — Tom Ryan, Lambda Award winning author of I HOPE YOU'RE LISTENING

“Survival is core to the queer experience, and in All That’s Left In the World, Brown takes that to apocalyptic extremes with the story of Andrew and Jamie. This is quintessentially brave, dangerous-in-the-best-way queer storytelling!”-- — Adam Sass, award-winning author of Surrender Your Sons

“All That’s Left in the World is unfailingly riveting and hopeful. A timely exploration of survival, trauma, and love stitched together with sharp wit and bone-deep emotion. Erik J. Brown is an invigorating voice to watch out for.” — Julian Winters, award-winning author of Running With Lions

"It’s difficult to say Andrew and Jamie are lucky, as each lost everyone they knew, but love like this—a small ember carefully tended until it erupts into a sustaining flame—is rare even when there are millions of people around you." — Bulletin of the Center for Children’s Books