It Would Be Night in Caracas (Paperback) 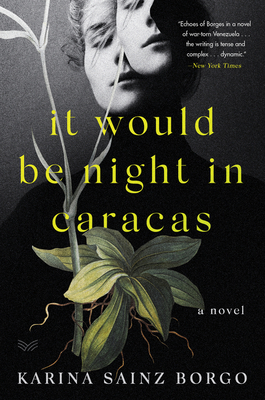 As seen in the New York Times Book Review

Told with gripping intensity, It Would be Night in Caracas chronicles one woman’s desperate battle to survive amid the dangerous, sometimes deadly, turbulence of modern Venezuela and the lengths she must go to secure her future.

"Echoes of Borges in a novel of war-torn Venezuela . . . the writing is tense and complex . . . dynamic." -The New York Times

In Caracas, Venezuela, Adelaida Falcón stands over an open grave. Alone, she buries her mother—the only family she has ever known—and worries that when night falls thieves will rob the grave. Even the dead cannot find peace here.

Adelaida had a stable childhood in a prosperous Venezuela that accepted immigrants in search of a better life, where she lived with her single-mother in a humble apartment. But now? Every day she lines up for bread that will inevitably be sold out by the time she reaches the registers. Every night she tapes her windows to shut out the tear gas raining down on protesters. When looters masquerading as revolutionaries take over her apartment, Adelaida must make a series of gruesome choices in order to survive in a country disintegrating into anarchy, where citizens are increasingly pitted against each other. But just how far is she willing to go?

A bold new voice from Latin America, Karina Sainz Borgo’s touching, thrilling debut is an ode to the Venezuelan people and a chilling reminder of how quickly the world we know can crumble.

Karina Sainz Borgo was born and raised in Caracas. She began her career in Venezuela as a journalist for El Nacional. Since immigrating to Spain ten years ago, she has written for Vozpópuli and collaborates with the literary magazine Zenda. She is the author of two nonfiction books, Tráfico y Guaire (2008) and Caracas Hip-Hop (2008). It Would Be Night in Caracas is her first work of fiction.

“The next literary sensation.”
— El Mundo

“A propulsively written, harrowing story, as desperate as it is timely.”
— Kirkus Reviews (starred review)

“Sainz Borgo’s excellent debut is a harrowing account of one woman grieving the recent death of her mother while attempting to survive the political unrest in Caracas, Venezuela.”
— Publishers Weekly (starred review)

&#8220Echoes of Borges in a novel of war-torn Venezuela…the writing is tense and complex…dynamic.”
— New York Times