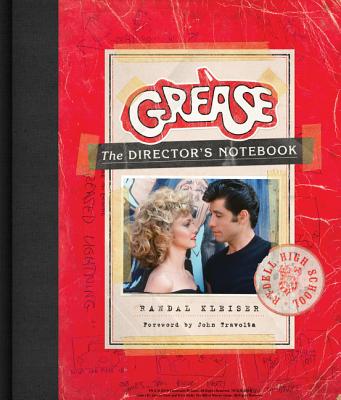 Grease is the word . . . Released more than four decades ago, the film version of Grease is one of the highest-grossing musicals of all time and a bona fide global sensation with legions of devoted fans across generations. For the first time ever, the film’s director, Randal Kleiser, looks back at the making of this legendary cultural landmark.

Created in conjunction with Paramount Pictures and authorized by Jim Jacobs and Warren Casey (via his Estate), the creators of the original musical stage play, Grease: The Director’s Notebook features rare and never-before-seen imagery from the studio’s archives, as well as Kleiser's production notes, dialogue changes, and more. The book’s heart is Kleiser’s own heavily annotated shooting script, along with his storyboards and sketches—including lines from the play that were added to the film’s script.

Grease: The Director’s Notebook is a fitting tribute to this revered international phenomenon and the one book the movie’s adoring fans will want.

TM & © 2019 James H. Jacobs Trust and Trust Under The Will of Warren Casey. All Rights Reserved.

Randal Kleiser’s other credits include The Boy in the Plastic Bubble, The Blue Lagoon, Summer Lovers, Flight of the Navigator, White Fang, Big Top Pee-wee, Honey, I Blew Up the Kid, North Shore, and It’s My Party. With George Lucas, he produced the educational course: The Nina Foch Course for Filmmakers and Actors.

Always involved in cutting-edge technology, he directed the 70mm 3D Honey, I Shrunk the Audience for the Disney Parks around the world. This lead to the US Government signing him to develop a virtual reality simulator to train American soldiers to deal with Improvised Explosive Devices in the Middle East.

In 2019 he released the 12-part virtual reality series Defrost, which debuted at the Sundance Film Festival and was shown at Cannes. Experimenting with Paramount and Intel Studios, Kleiser reimagined the Grease song "You’re the One That I Want" using volumetric capture technology.

Kleiser has served on the National Board of the Directors Guild of America and on the Sci Tech Council of the Academy of Motion Picture Arts and Sciences.