The Lies They Tell (Paperback) 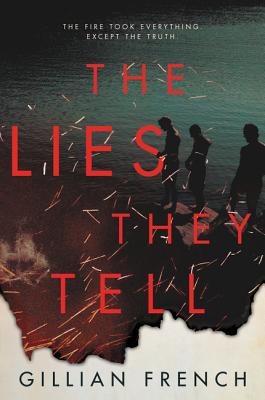 By Gillian French
$9.99
Email or call for price.

With shades of E. Lockhart’s We Were Liars and Courtney Summers’s Sadie, this dark and twisted mystery set in a divided Maine seaside town simmers with unresolved tensions and unpredictable truths.

Everyone in Tenney’s Harbor knows about the Garrison tragedy. How an unexplained fire ravaged their house, killing four of the five family members. But what people don’t know is who did it.

All fingers point at Pearl Haskins’ father, who was the caretaker of the property, but Pearl just doesn’t believe it. Leave it to a town of rich people to blame “the help.”

With her disgraced father now trying to find work in between booze benders, Pearl’s future doesn’t hold much more than waiting tables at the local country club, where the wealthy come to flaunt their money and spread their gossip. This year, Tristan, the last surviving Garrison, and his group of affluent and arrogant friends have made a point of sitting in Pearl’s section. Though she’s repulsed by most of them, Tristan’s quiet sadness and somber demeanor have her rethinking her judgments.

Befriending the boys could mean getting closer to the truth, clearing her father’s name, and giving Tristan the closure he seems to be searching for. But it could also trap Pearl in a sinister web of secrets, lies, and betrayals that would leave no life unchanged…if it doesn’t take hers first.

Gillian French is the author of The Lies They Tell, The Missing Season, and Edgar Award finalist Grit, which was an Indie Next List pick and received starred reviews from Kirkus Reviews and ALA Booklist. She holds a BA in English from the University of Maine and lives in Maine with her husband and sons. www.gillianfrench.com.

“Gorgeously written, chilling, and twisty, The Lies They Tell kept me guessing until the very end. Small-town mystery at its best.” — Carlie Sorosiak, author of If Birds Fly Back and Wild Blue Wonder

“Gillian French combines class struggles, family drama, and, of course, murder, like an alchemist, creating something greater than its parts. This book lingers in the best way possible.” — Lamar Giles, Edgar Award Finalist and author of Fake ID and Endangered

“The Lies They Tell kept me guessing until the final pages. Readers will root for Pearl as she navigates an undercurrent of darkness and deception. A strong heroine, a satisfying conclusion--one of the best YA novels I’ve read all year.” — Paula Stokes, author of Liars, Inc.

“With haunting, gorgeous prose, The Lies They Tell is a masterful mystery where big secrets lurk in small towns. Privileged summer families, murder, intoxicating boys, and a fierce heroine converge in this novel perfect for fans of We Were Liars and One of Us is Lying.” — Shannon M. Parker, author of The Girl Who Fell and Rattled Bones

“Absolutely propulsive storyline. Every single character is written with precision and complexity, while the setting is vividly provoked and lovingly portrayed.” — Jessie Ann Foley, author of Neighborhood Girls and Michael Printz Honor Book The Carnival at Bray

“With intriguing characters and unexpected twists and turns, French keeps her readers guessing until the very end.  Fans of E. Lockhart’s We Were Liars and Allan Wolff’s Who Killed Christopher Goodman? should add this title to their must-read lists. A valuable addition to thriller shelves.” — School Library Journal

“Much as in her debut Grit, French gives a disturbing picture of the world bought by privilege and power.” — Bulletin of the Center for Children’s Books

“Pearl is an empathetic character, and French does an excellent job of highlighting the tension between social classes in this slow-burning mystery, as well as the difficulties of navigating family drama. “ — Publishers Weekly

“The Lies They Tell is one of the most satisfying displays of the mystery craft that I’ve read all year.” — Press Herald