The Actual One: How I Tried, and Failed, to Avoid Adulthood Forever (Paperback) 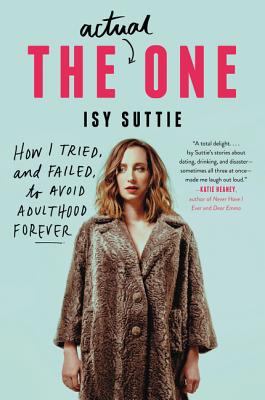 A hilarious, razor-sharp debut memoir about the moment when you realize that your friends have all grown up and left you behind, for readers of Caitlin Moran’s How To Be A Woman, Jenny Lawson’s Let’s Pretend This Never Happened, and Kelly Williams Brown’s Adulting.

Isy Suttie wakes up one day in her late twenties to discover that the deal she’d struck with her friends, to put off growing up for as long as possible, had been entirely in her head. Everyone around her is suddenly into mortgages, farmers’ markets, and going off the Pill, rather than running naked into the sea or getting hammered in a country pub with eighty-year-old men.

After a particularly crushing breakup precipitated by Isy’s gifting of a human-size papier-mâché penguin to her boyfriend, her dearest friend advises Isy not to worry: the next guy she meets will be The Actual One.

Heartened by this promise, Isy decides to keep delaying the onset of adulthood, whether that means standing on the side of a highway in nothing but an old fur coat and sneakers, dating a man who speaks only in rhyme, or conquering her fears of Alpine skiing by wildly overestimating her athletic ability. Insightful and laugh-out-loud funny, The Actual One is an ode to the confusing wilderness of your late twenties, alongside a quest for a genuinely good relationship . . . or at the very least, a good story to tell.

Isy Suttie is a comedian, actress, and writer who started performing stand-up in 2002. She has written for The Guardian, The Observer, and Glamour, and is a regular writer and performer on BBC Radio 4, where her show Pearl and Dave won a Gold Sony Award in 2013. Her TV acting credits include Dobby in Peep Show and Esther in Shameless, and she has been nominated for three British Comedy Awards.

“The Actual One is a total delight: the perfect read for anyone who has ever felt frustrated and bewildered by the concept of “The One,” which is to say, probably just about everyone. Isy Suttie’s stories about dating, drinking, and disaster - sometimes all three at once - made me laugh out loud so often I annoyed the people in my immediate surroundings.”
— Katie Heaney, author of Never Have I Ever and Dear Emma

“Suttie’s mix of human observation and self-examination makes her a cross between Lena Dunham and Victoria Wood. The Actual One is about the moment she realised all her friends were growing up, and the deal they’d all made to stay young for ever was only in her head.”
— Sunday Times (London)

“Witty, whimsical, and weird . . . Suttie’s writing style is light and creative, and both fans of this British comedian and readers looking for a smart, funny read will speed through her literary debut.”
— Booklist