The World According to Star Wars (Hardcover) 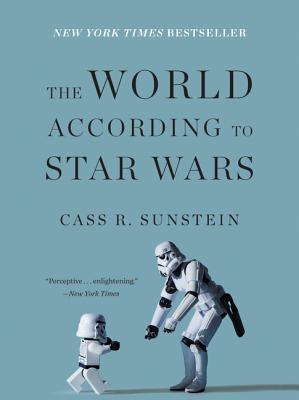 “Irresistibly charming, acclaimed legal scholar Sunstein writes partly as a rigorous academic and partly as a helpless fanboy as he explores our fascination with Star Wars and what the series can teach us about the law, behavioral economics, history, and even fatherhood. This book is fun, brilliant, and deeply original.”—Lee Child

There’s Santa Claus, Shakespeare, Mickey Mouse, the Bible, and then there’s Star Wars. Nothing quite compares to sitting down with a young child and hearing the sound of John Williams’s score as those beloved golden letters fill the screen. In this fun, erudite, and often moving book, Cass R. Sunstein explores the lessons of Star Wars as they relate to childhood, fathers, the Dark Side, rebellion, and redemption. As it turns out, Star Wars also has a lot to teach us about constitutional law, economics, and political uprisings.

In rich detail, Sunstein tells the story of the films’ wildly unanticipated success and explores why some things succeed while others fail. Ultimately, Sunstein argues, Star Wars is about freedom of choice and our never-ending ability to make the right decision when the chips are down. Written with buoyant prose and considerable heart, The World According to Star Wars shines a bright new light on the most beloved story of our time.

Cass R. Sunstein is the Robert Walmsley University Professor at Harvard, where he is founder and director of the Program on Behavioral Economics and Public Policy. He is the most cited law professor in the United States and probably the world. He has served as Administrator of the White House Office of Information and Regulatory Affairs and as a member of the President’s Review Group on Intelligence and Communications Technologies. He is the winner of the 2018 Holberg Prize. His many books include the bestseller Nudge: Improving Decisions about Health, Wealth, and Happiness (with Richard H. Thaler), Simpler: The Future of Government, and Republic.com. A frequent adviser to governments all over the world and a columnist for Bloomberg View, he is married to the United States Ambassador to the United Nations, Samantha Power.

“Entertaining…the ultimate primer for guiding a Star Wars padawan to the level of Jedi Knight.”
— TIME

“Delightful… informative without being boring, funny without being silly.. a marvelous swift read. The force is strong with this one.”
— The Economist

“If you love Star Wars or are a nerd and want an engaging introduction to concepts in legal theory or behavioural economics, Sunstein does the trick with levity and clarity’.”
— The Times

“An enlightening and surprisingly personal tour of a galaxy...Sunstein offers plenty of fun details and opinions.”
— Washington Post

“Sunstein makes a strong case that [Star Wars] contains real insights into the way we think about religion, work, and family...the book’s takeaways are universal.”
— Fortune

“In this gem of a book, Cass Sunstein uses the Star Wars series to explore profound questions about being a parent, a child, and a human. It will change the way you think about your own journey, might even make you pick up the phone and call your dad.”
— Walter Isaacson

“Irresistibly charming, acclaimed legal scholar Sunstein writes partly as a rigorous academic and partly as a helpless fanboy as he explores our fascination with Star Wars and what the series can teach us about the law, behavioral economics, history, even fatherhood. This book is fun, brilliant, and deeply original.”
— Lee Child

“In this remarkable, book Sunstein manages to connect invisible gorillas, hit songs, conspiracy theories, and constitutional law. For anyone who loves the movies, or loves to think about how the world works, or simply loves their father The World According to Star Wars will provoke and inspire.”
— Duncan Watts, Principal Researcher at Microsoft Research and author of Everything is Obvious (Once You Know the Answer)

“Fun and informative without getting bogged down with being too analytic or too fan-ish.”
— Jeffrey Brown, author of the bestselling Goodnight Darth Vader

“Cass R. Sunstein has done it: He’s made Star Wars into a valuable legal text. In The World According to Star Wars, he considers the social, political, and moral ramifications of the films’ mythology… Sunstein provides new insights into a series we love.”
— Slate

“[a] soon-to-be-required-for-college text”
— Geeks of Doom