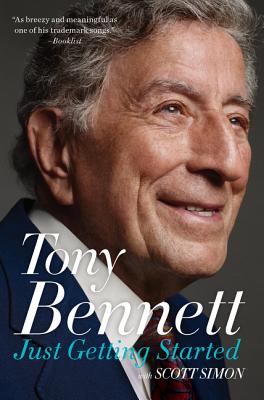 By Tony Bennett, Scott Simon
$19.99
On Our Shelves Now

At ninety, musician and singer Tony Bennett is as vibrant and productive as ever. In addition to his prodigious musical output, including albums, concerts, and personal appearances, this beloved and enduring artist has written his second book. In 2012’s Life Is a Gift, Tony reflected on the lessons he has learned over the years. Now, in Just Getting Started, he pays homage to the remarkable people who inspired those lessons.

In his warm and inviting voice, Tony talks about who and what have enriched his own life, including Charlie Chaplin, Judy Garland, Dr. Martin Luther King, Jr., Cole Porter, Amy Winehouse, Fred Astaire, Lady Gaga, members of his family, significant places, and more. Just Getting Started chronicles the relationship Tony has enjoyed with each one of these legends, entertainers, humanitarians, and loved ones, and reveals how the lessons and values they imparted have invaluably shaped his life.

As enchanting and unforgettable as his music, Just Getting Started is a beautiful compilation of reflections every Bennett fan will treasure, and a perfect introduction for those just getting to know this remarkable star and humanitarian.

Scott Simon is the New York Times bestselling author of Unforgettable: A Son, a Mother, and the Lessons of a Lifetime. He is one of America’s most admired writers and broadcasters, having reported from all over the world and from many wars. He is now the award-winning host of Weekend Edition Saturday. With more than four million listeners, it is the most-listened-to news program on National Public Radio. Simon has won Peabody and Emmy Awards for his reporting.

“Fans of heralded crooner Bennett will revel in this inviting charming book...In these beguiling portraits, Bennett warmly remembers of the deep influences on his life.”
— Publishers Weekly

“[Just Getting Started] is as breezy and meaningful as one of his trademark songs as readers learn about the man by the company he kept and the heroes he worships. Bennett’s ethereal still lifes and landscape paintings adorn this simple yet profound and gracious homage.”
— Booklist

“In Just Getting Started...the singer takes a look back on his long, successful career and rich life...What comes through in all 42 chapters is the singer’s gratitude...Let’s hope this new generation can learn a lesson from Mr. Bennett’s unflagging class and graciousness.
— Wall Street Journal