The Woman Who Smashed Codes: A True Story of Love, Spies, and the Unlikely Heroine Who Outwitted America's Enemies (Paperback) 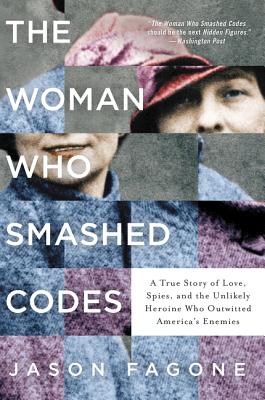 NPR Best Book of the Year

“Not all superheroes wear capes, and Elizebeth Smith Friedman should be the subject of a future Wonder Woman movie.” —The New York Times

Joining the ranks of Hidden Figures and In the Garden of Beasts, the incredible true story of the greatest codebreaking duo that ever lived, an American woman and her husband who invented the modern science of cryptology together and used it to confront the evils of their time, solving puzzles that unmasked Nazi spies and helped win World War II.

In 1916, at the height of World War I, brilliant Shakespeare expert Elizebeth Smith went to work for an eccentric tycoon on his estate outside Chicago. The tycoon had close ties to the U.S. government, and he soon asked Elizebeth to apply her language skills to an exciting new venture: code-breaking. There she met the man who would become her husband, groundbreaking cryptologist William Friedman. Though she and Friedman are in many ways the "Adam and Eve" of the NSA, Elizebeth’s story, incredibly, has never been told.

In The Woman Who Smashed Codes, Jason Fagone chronicles the life of this extraordinary woman, who played an integral role in our nation’s history for forty years. After World War I, Smith used her talents to catch gangsters and smugglers during Prohibition, then accepted a covert mission to discover and expose Nazi spy rings that were spreading like wildfire across South America, advancing ever closer to the United States. As World War II raged, Elizebeth fought a highly classified battle of wits against Hitler’s Reich, cracking multiple versions of the Enigma machine used by German spies. Meanwhile, inside an Army vault in Washington, William worked furiously to break Purple, the Japanese version of Enigma—and eventually succeeded, at a terrible cost to his personal life.

Fagone unveils America’s code-breaking history through the prism of Smith’s life, bringing into focus the unforgettable events and colorful personalities that would help shape modern intelligence. Blending the lively pace and compelling detail that are the hallmarks of Erik Larson’s bestsellers with the atmosphere and intensity of The Imitation Game, The Woman Who Smashed Codes is page-turning popular history at its finest.

Jason Fagone is a journalist who covers science, technology, and culture. Named one of the “Ten Young Writers on the Rise” by the Columbia Journalism Review, he works at the San Francisco Chronicle and has written for GQ, Esquire, The Atlantic, the New York Times, Mother Jones, and Philadelphia magazine. Fagone is also the author of Ingenious: A True Story of Invention, the X Prize, and the Race to Revive America and Horsemen of the Esophagus: Competitive Eating and the Big Fat American Dream. He lives in San Francisco, California.

“[Fagone] documents the amazing arc of his subject’s life, often in stunning detail…Ms. Friedman was not only crypto pioneer and a patriotic spycatcher, but also an inspiring role model.” — Wired

“The Woman Who Smashed Codes...has drawn comparisons to Hidden Figures, though we think this one is better. In journalist Jason Fagone’s deft hands, we not only learn about a lost national treasure, but also get new insight into the history of our country at war.” — New York Post

“[Elizebeth Friedman] was a tireless and talented code breaker who brought down gangsters and Nazi spies...a fascinating swath of American history that begins in Gilded Age Chicago and moves to the inner workings of our intelligence agencies at the close of WWII.”
— Los Angeles Times

“Damned-near impossible to put down. The book has everything: thrills, chills, kills, love, crypto, and a hopeful sense that a nearly forgotten American genius, Elizebeth Smith Friedman, is finally being given her due.” — Ars Technica

“It’s unsurprising that the name Elizebeth Friedman doesn’t ring a bell for most Americans, given how much of her work was classified during the war.... Still, this Quaker-born poet from Indiana was the grandmother of the National Security Agency and virtually created the modern code-breaking profession. Trust us on this one.” — Forbes

“This is the best work of nonfiction I’ve ever read—no hyperbole...Fagone has painstakingly worked backward to piece together a truth that has been buried for too long. In the process, he has helped Friedman gain recognition as the American hero she was.” — MIT Technology Review

“In The Woman Who Smashed Codes, journalist Jason Fagone recreates a world and a cast of characters so utterly fascinating they will inhabit the psyches of its readers long after the book has been read.” — Associated Press

“One of the year’s best reads, it is both deeply researched and beautifully told.” — The Philadelphia Inquirer

“The Woman Who Smashed Codes should be the next Hidden Figures...a story that anyone with interest in the time period has to read, a key piece of the puzzle about America’s war effort.” — Washington Post

“This book tells the incredible, little-known story of code-breaker Elizebeth Smith and her husband, cryptologist William Friedman, otherwise known as the ‘Adam and Eve’ of the NSA.” — New York Post

“Reads like some wild cross between a fairy tale and a gripping detective thriller... a sheer delight to read.”  — San Francisco Chronicle

“Bursting with details in everything from dinner parties to spy rings, Fagone’s book offers the story of a fascinating woman in perilous times, and asks some uneasy questions about the present.” — NPR.org

“The Woman Who Smashed Codes is historical reporting done right, assigning credit where it is long overdue.” — Seattle Book Review

“A bang-up research effort [and] an engaging resurrection of a significant player in the world of cryptology.” — Kirkus Reviews

“Fagone is a superb writer and has created a fascinating tale of a woman who brought down Prohibition-era smugglers, Nazi’s, counterfeiters, gangsters and more. ” — Ben Rothke, RSA Conference

“A powerful love story, a story of war, and a fascinating biography, The Woman Who Smashed Codes is a magnificent work of literary nonfiction that sheds light on an important hidden figure. You will devour this book.” — Karen Abbott, New York Times bestselling author of Sin in the Second City

“Deeply reported and stunningly original, The Woman Who Smashed Codes is a riveting narrative about one of the most overlooked figures in American history—a figure whose remarkable story was essentially ignored for more than seventy years simply because she was a woman.” — Stefan Fatsis, bestselling author of Word Freak

“Jason Fagone is a master storyteller—and he’s telling one damn good story about a long-forgotten American heroine. It is, among many things, the compulsively readable history of the national security state in its infancy. His book is filled with memorable villains, intrigue, and love.” — Franklin Foer, New York Times Bestselling author of How Soccer Explains the World and the forthcoming World Without Mind

“Jason Fagone’s stunning narrative unearths an intimate and unexpected history of code breaking. This remarkable tale reveals the fundamental role cryptology has played in our past, and the untold story of the pioneering woman behind its evolution. It is a treasure of a book.” — Nathalia Holt, New York Times bestselling author of Rise of the Rocket Girls: The Women Who Propelled Us From Missiles to the Moon to Mars

“In The Woman Who Smashed Codes, Jason Fagone rights a historical wrong, unshrouding an unsung heroine and revealing the love story at the root of the modern world’s spy games. But this book’s true revelation is the author’s talent: sure-handed, thrilling, and lyrical.” — Benjamin Wallace, author of The Billionaire’s Vinegar