Spies in the Family: An American Spymaster, His Russian Crown Jewel, and the Friendship That Helped End the Cold War (Paperback) 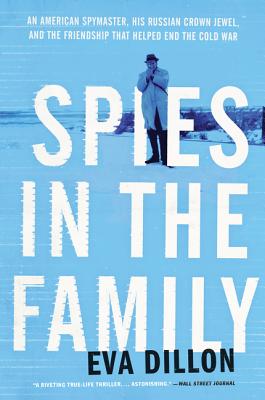 Now in paperback, a riveting true-life thriller and revealing memoir from the daughter of an American intelligence officer—the astonishing true story of two spies and their families on opposite sides of the Cold War

In the summer of 1975, seventeen-year-old Eva Dillon was living in New Delhi when her father was exposed as a CIA spy. Eva had long believed that her father was a U.S. State Department employee. She had no idea that he was handling the CIA’s highest-ranking double agent—Dmitri Fedorovich Polyakov—a Soviet general whose code name was TOPHAT. Dillon’s father and Polyakov had a close friendship that went back years, to their first meeting in Burma in the mid-1960s. At the height of the Cold War, the Russian offered the CIA an unfiltered view into the vault of Soviet intelligence. His collaboration helped ensure that tensions between the two nuclear superpowers did not escalate into a shooting war.

Spanning fifty years and three continents, Spies in the Family is a deeply researched account of two families on opposite sides of the lethal espionage campaigns of the Cold War, and two men whose devoted friendship lasted a lifetime, until the devastating final days of their lives. With impeccable insider access to both families as well as knowledgeable CIA and FBI officers, Dillon goes beyond the fog of secrecy to craft an unforgettable story of friendship and betrayal, double agents and clandestine lives, that challenges our notions of patriotism, exposing the commonality between peoples of opposing political economic systems.

Both a gripping tale of spy craft and a moving personal story, Spies in the Family is an invaluable and heart-rending work.

Eva Dillon spent twenty-five years in the magazine publishing business in New York City, including stints at Vogue, Harper’s Bazaar, Glamour, The New Yorker, and as president of Reader’s Digest, U.S.  Dillon and her six siblings grew up moving around the world for her father's CIA assignments in Berlin, Mexico City, Rome, and New Delhi. She holds a bachelor’s in Music from Virginia Commonwealth University and lives in Charleston, South Carolina.

“A riveting read, Dillon creatively weaves the narratives of her CIA father’s career and family life with those of Dmitri Polyakov, one of the Cold War’s most valuable Russian assets. An untold and important story that’s been a long time coming, this book is worth the wait.” — The Hon. John Lehman, Former Secretary of the Navy and 9/11 Commissioner

“This spellbinder spans lives, families and politics on opposite sides of the Cold War, combining suspenseful accounts of two intelligence agents deeply committed to avoiding nuclear war with each family’s unique—and heartbreaking—experiences. This moving story is gripping from start to finish.” — Jacqueline Leo, President and Editor in Chief, The Fiscal Times; former Editor in Chief, Reader’s Digest

“A beautifully written, profoundly moving account of one of the most important U.S Intelligence sources ever run inside the Soviet Union. A cliff-hanger from beginning to end, Dillon’s account is filled with espionage tradecraft and family drama—essential reading for anyone fascinated by how spying really works.” — Peter Earnest, Executive Director, International Spy Museum

“Interweaving details of daring tradecraft with moving human elements, Dillon tells the fascinating story of two agents and their families with differing experiences and perspectives, and very different outcomes. This mesmerizing book will appeal to historians, spy-buffs, intelligence professionals and everyday readers alike.” — H. Keith Melton, author of Ultimate Spy, and co-author (with Robert Wallace) of Spycraft and the Spy Sites series

“Eva Dillon expertly tells an untold chapter of Cold War espionage from a front row seat. It was her father, after all, who was the Spymaster. This is a warm, riveting, great read.” — Joe Drape, New York Times bestselling author, American Pharoah and Our Boys

“With detail and technique that are almost novelistic, Dillon weaves the personal stories of the two families: her own and that of Polyakov. Reads like a fine spy novel whose ending we know but whose story transports us nonetheless.” — Kirkus Reviews (starred review)