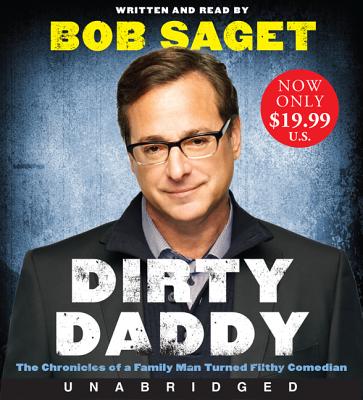 By Bob Saget, Bob Saget (Read by)
Email or call for price
Hard to Find

Millions of viewers know and love Bob Saget from his role on the smash hit Full House, and as the charming wisecracking host of America's Funniest Home Videos. And then there are the legions of fans who can't get enough of his out-of-his-mind stand-up routines, comedy specials, and outrageously profane performances in such shows as HBO's Entourage and the hit documentary The Aristocrats. In his bold and wildly entertaining publishing debut, Bob continues to embrace his dark side and gives listeners the audiobook they have long been waiting for—hilarious and often dirty yet warm and disarmingly sincere.

Bob believes there's a time and a place for filth and immature humor—and for gentle family comedy. Dirty Daddy is packed with both, from his never-before-heard stories of what really went on behind the scenes of two of the most successful family shows of all times, with costars like John Stamos, Mary-Kate Olsen, and Ashley Olsen, to his liberating experience in The Aristocrats, his Comedy Central roast, and his role of playing an extreme version of himself on Entourage. Bob opens up about his career, his reputation for sick humor, and his pride and love for Full House. Told with his highly original blend of silliness, vulgarity, wit, and heart, Dirty Daddy reveals Bob Saget as never before—a man who loves being funny and making people laugh above all else.

Bob Saget is a Grammy-nominated stand-up comedian, actor, director, writer, producer, and television host who has been performing for more than thirty years. He lives in Los Angeles, California.

Bob Saget is a Grammy-nominated stand-up comedian, actor, director, writer, producer, and television host who has been performing for more than thirty years. He lives in Los Angeles, California.