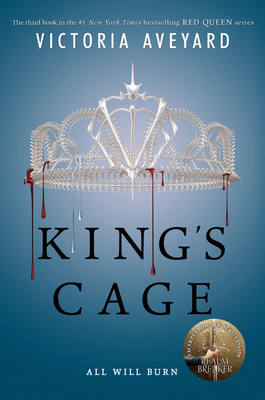 This is book number 3 in the Red Queen series.

In this breathless third installment to Victoria Aveyard’s #1 New York Times bestselling Red Queen series, rebellion is rising and allegiances will be tested on every side. Perfect for fans of George R.R. Martin’s Game of Thrones series.

Mare Barrow is a prisoner, powerless without her lightning, tormented by her lethal mistakes. She lives at the mercy of a boy she once loved, a boy made of lies and betrayal. Now a king, Maven Calore continues weaving his dead mother's web in an attempt to maintain control over his country—and his prisoner.

As Mare bears the weight of Silent Stone in the palace, her once-ragtag band of newbloods and Reds continue organizing, training, and expanding. They prepare for war, no longer able to linger in the shadows. And Cal, the exiled prince with his own claim on Mare's heart, will stop at nothing to bring her back.

When blood turns on blood, and ability on ability, there may be no one left to put out the fire—leaving Norta as Mare knows it to burn all the way down.

Plus don't miss Realm Breaker! Irresistibly action-packed and full of lethal surprises, this stunning fantasy series from Victoria Aveyard, #1 New York Times bestselling author of the Red Queen series, begins where hope is lost and asks: When the heroes have fallen, who will take up the sword?

Victoria Aveyard was born and raised in East Longmeadow, Massachusetts, a small town known only for the worst traffic rotary in the continental United States. She moved to Los Angeles to earn a BFA in screenwriting at the University of Southern California. She currently splits her time between the East and West coasts. As an author and screenwriter, she uses her career as an excuse to read too many books and watch too many movies. She is the author of the New York Times bestselling Red Queen series, and you can visit her online at www.victoriaaveyard.com.

“Another devastating cliff-hanger ending will leave readers hungry for the final volume.” — Booklist

“Aveyard’s ‘little lightning girl’ remains a relatable and deeply flawed heroine... Aveyard adeptly sets the scene for a fourth book to follow, amid a war not yet won.” — Publishers Weekly

PRAISE FOR GLASS SWORD: “High-stakes excitement and sharp plot twists…make this a fast-paced, exciting read and a thrilling sequel.” — Booklist

“Aveyard certainly has a flair for the dramatic, which teens will eat up. The action hits the ground running and doesn’t stop until after the last page is turned.” — School Library Journal

“Fast-paced and action packed, Glass Sword is compelling and strong, guaranteed to gratify anxious readers of the series and fans of dystopian and fantasy literature.” — Voice of Youth Advocates (VOYA)

“A volatile world with a dynamic heroine.” — Booklist

“[Aveyard] sets her audience up for a gaspworthy twist that reconfigures nearly every character’s role and leaves Mare with no one to trust but herself... This blend of fantasy and dystopia will be an unexpected and worthy addition to many genre fans’ reading list.” — Bulletin of the Center for Children’s Books