Brief Candle in the Dark: My Life in Science (Hardcover) 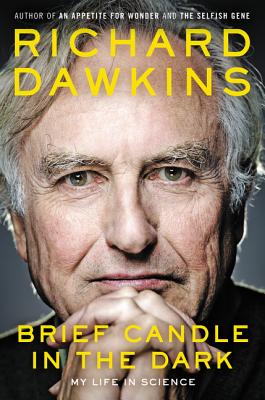 By Richard Dawkins
$27.99
Email or call for price.

In this hugely entertaining sequel to the New York Times bestselling memoir An Appetite for Wonder, Richard Dawkins delves deeply into his intellectual life spent kick-starting new conversations about science, culture, and religion and writing yet another of the most audacious and widely read books of the twentieth century—The God Delusion.

Called “one of the best nonfiction writers alive today” (Stephen Pinker) and a “prize-fighter” (Nature), Richard Dawkins cheerfully, mischievously, looks back on a lifetime of tireless intellectual adventure and engagement. Exploring the halls of intellectual inquiry and stardom he encountered after the publication of his seminal work, The Selfish Gene; affectionately lampooning the world of academia, publishing, and television; and studding the pages with funny stories about the great men and women he’s known, Dawkins offers a candid look at the events and ideas that encouraged him to shift his attention to the intersection of culture, religion, and science. He also invites the reader to look more closely at the brilliant succession of ten influential books that grew naturally out of his busy life, highlighting the ideas that connect them and excavating their origins.

On the publication of his tenth book, the smash hit, The God Delusion, a “resounding trumpet blast for truth” (Matt Ridley), Richard Dawkins was catapulted from mere intellectual stardom into a circle of celebrity thinkers dubbed, “The New Atheists”—including Christopher Hitchens, Sam Harris, and Daniel Dennett.

Throughout A Brief Candle in the Dark, Dawkins shares with us his infectious sense of wonder at the natural world, his enjoyment of the absurdities of human interaction, and his bracing awareness of life’s brevity: all of which have made a deep imprint on our culture.

Richard Dawkins was first catapulted to fame with his iconic work The Selfish Gene, which he followed with a string of bestselling books. Part one of his autobiography, An Appetite for Wonder, was published in 2013.

In 2012, scientists studying fish in Sri Lanka created Dawkinsia as a new genus name, in recognition of his contribution to the public understanding of evolutionary science. In the same year, Richard Dawkins appeared in the BBC Four television series Beautiful Minds, revealing how he came to write The Selfish Gene and speaking about some of the events covered in this autobiography.

In 2013, Dawkins was voted the world's top thinker in Prospect magazine's poll of over 10,000 readers from over 100 countries.

“If anyone in modern science deserves to regard his or her own contribution with pride, even with triumph, it is Richard Dawkins… Vastly illuminating.” — New York Times Book Review

“. . . a jam-packed memoir by a brilliant, complex, and contradictory man. . . . What makes Candle a page-turner is Dawkins’ engaging, conversational style and hilarious anecdotes.” — Philadelphia Inquirer

“...fascinating, thoroughly readable, and joyful. . . . Dawkins offers great insight into the nature of science and introduces readers to many of the major players responsible for creating the field of evolutionary biology.” — Publishers Weekly

“Displays all the intelligence, insight, clear-thinking, literary quality, and at time provocative observations we have come to expect from Dawkins.” — Skeptical Inquirer

“Readers of Brief Candle are in for many treats: lively prose from one of our greatest living writers; stimulating ideas on the nature of life and the human condition; and the opportunity to eavesdrop on the workings of an extraordinary mind, intellectually fierce yet personally generous.” — Steven Pinker, Johnstone Professor of Psychology, Harvard University, and author of The Language Instinct and The Better Angels of Our Nature

“Filled with delight. . . . He gives full credit to collaborators, shares of his loves as well as his sorrows, and adds a wealth of interesting details about the inspiration for his books and his popular writing’s relationship to his purely scientific work. ” — Oregonian

“This is the Richard Dawkins I have come to know and respect as a friend, colleague, and fellow traveler. For those who want some insight into the true nature of the man behind The Selfish Gene and The God Delusion, this book is sure to please, and perhaps surprise.” — Lawrence M. Krauss is a theoretical physicist and cosmologist and the author of bestselling books including The Physics of Star Trek, and A Universe from Nothing. He co-starts with Richard Dawkins in the film The Unbelievers.

“Richard always writes like he’s telling you a story, which is why so many of us non-science people understand science better than we used to. But when the story is his own life, it’s doubly compelling.” — Bill Maher

“Brief Candle in the Dark provides so many pleasures: the searing clarity of scientific insights and explanations; the depth of wit and width of erudition; a prose which can soar to poetry while never losing its accuracy; an inspired delight in the beauty of nature’s ways.” — Rebecca Newberger Goldstein, author of Plato at the Googleplex: Why Philosophy Won't Go Away

“Brief Candle in the Dark gives future historians [Dawkins’] pathway to greatness that begins with the publication of his monumental The Selfish Gene and climaxes with the book that may do more to elevate atheism to a legitimate position than any that came before, whose impact reverberates still.” — Michael Shermer, Publisher of Skeptic magazine, monthly columnist at Scientific American, author of The Moral Arc

“Sometimes funny, sometimes fascinating, and always interesting, Dawkins takes us through his later years, revealing the humanity behind the man like never before. Brief Candle in the Dark reminds us, warmly and eloquently, that the greatest accomplishments are achieved when science is bolstered by good will and kindness.” — David Silverman, President of American Atheists, Inc.

“In Brief Candle in the Dark, Dawkins takes us through a journey of anecdotes and conversations with world-class scientists and thinkers. You don’t have to be a scientist to appreciate how deeply Dawkins loves interpreting science for the rest of us in this remarkable book about his own life.” — Herb Silverman is Distinguished Professor Emeritus, founder and president of the Secular Coalition for America, and author of Candidate Without a Prayer: An Autobiography of a Jewish Atheist in the Bible Belt.