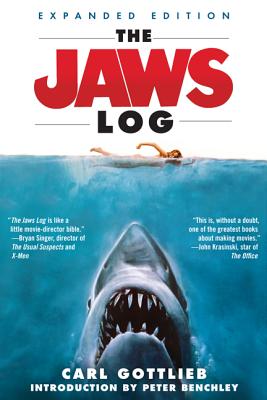 Winner of three Oscars and the highest-grossing film of its time, Jaws was a phenomenon, and this is the only book on how twenty-six-year-old Steven Spielberg transformed Peter Benchley's number-one bestselling novel into the classic film it became.

Hired by Spielberg as a screenwriter to work with him on the set while the movie was being made, Carl Gottlieb, an actor and writer, was there throughout the production that starred Roy Scheider, Robert Shaw, and Richard Dreyfuss. After filming was over, with Spielberg's cooperation, Gottlieb chronicled the extraordinary yearlong adventure in The Jaws Log, which was first published in 1975 and has sold more than two million copies. This expanded edition includes a photo section, an introduction by Benchley, and an afterword by Gottlieb that gives updates about the people and events involved in the film, ultimately providing a singular portrait of a famous movie and inspired moviemaking.

CARL GOTTLIEB is an actor, director, producer, screenwriter, and author whose books include the bestseller Long Time Gone: The Autobiography of David Crosby (with David Crosby). He lives in Hollywood, California.

“The Jaws Log is like a little movie director bible. Whenever I’m having a bad day at work, I got back and read a chapter…and thank the Lord I’m not shooting on the ocean.” — —Bryan Singer, Director, The Usual Suspects, X-Men

“Carl Gottlieb’s work is as entertaining as the movie it is about. In fact, you have not had the full Jaws experience until you have read, make that devoured, this wonderful book.” — -Rod Lurie, Director, The Contender

“Like Jonah writing from the belly of the whale, Carl Gottlieb’s journal of the process of making Jaws comes from the unique perspective of one of the major players in the collaboration that resulted in Spielberg’s classic movie.” — —John Landis, Director, The Blues Brothers