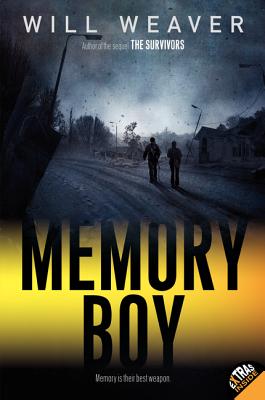 Ash is still falling from the sky two years after a series of globally devastating volcanic eruptions. Sunlight is as scarce as food, and cities are becoming increasingly violent as people loot and kill in order to maintain their existence. Sixteen-year-old Miles Newell knows that the only chance his family has of surviving is to escape from their Minneapolis suburban home to their cabin in the woods, As the Newells travel the highways on Miles' supreme invention, the Ali Princess, they have high hopes for safety and peace. But as they venture deeper into the wilderness, they begin to realize that it's not only city folk who have changed for the worse.

Will Weaver is an award-winning fiction writer. His latest novel is The Survivors, a sequel to his popular young adult novel Memory Boy. His other books include Full Service, Defect, Saturday Night Dirt, Super Stock Rookie, Checkered Flag Cheater, Claws, and the Billy Baggs books Striking Out, Farm Team, and Hard Ball, all of which are ALA Best Books for Young Adults. Formerly an English professor at Bemidji State University, he lives in northern Minnesota, a region he writes from and loves. He is an avid outdoorsman and enjoys hunting, fishing, canoeing, and hiking with his family and friends.

“Miles is a likeable, skateboarding wiseacre, full of fear and bravado, and always secretly hoping for his father’s approval.”
— School Library Journal