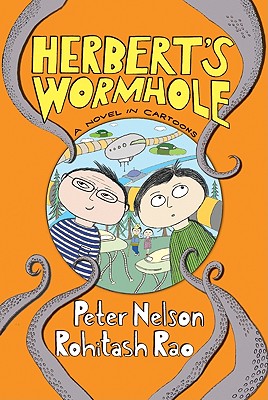 Herbert Slewg and his hapless, video game–addicted neighbor Alex Filby have stumbled upon what Einstein could only theorize about: a wormhole through the space/time continuum. They travel 100 years into the future of their no-longer-boring town and are mistaken for alien slayers . . . in a world run by a benevolent alien race with cheerful Australian accents and uncomfortably fake facial hair. Herbert, Alex, and their mutual crush, Sammi Clementine, century-hop across time in order to outwit a disgruntled “G’Dalien. By foiling his evil plot, they save the planet and become 22nd-century hometown heroes in this smart-alecky (but friendly), inventive, wry, and very visual creation.

Peter Nelson is a screenwriter who lives in Los Angeles, California, with his wife, Diane, and their two sons, Charlie and Christopher. Herbert's Wormhole was Peter's First children's book. He wrote it without ever having met an actual alien or traveling through time, which made it a bit more challenging, but just as fun.