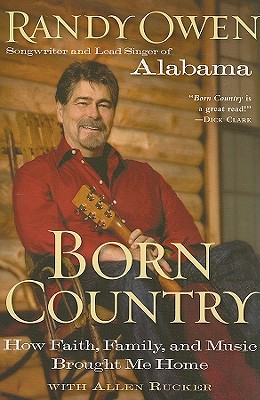 By Randy Owen, Allen Rucker
Email or call for price
Out of Print

“[Randy Owen] is a true gentleman, armed with an unassuming attitude and a modest approach to life, coupled with enormous fame and success. Born Country is a great read!”
—Dick Clark, former host of American Bandstand

Born Country is an inspiring memoir of faith, family, and living the American dream from the lead singer/songwriter of , the biggest country music group of all time. A multiple Grammy, People’s Choice, and Country Music Association Award-winning superstar, Randy Owen tells about growing up poor in rural Alabama, the son of devout Christian sharecroppers, his rise to the top of the charts, his personal trials and the destructive temptations he avoided through his love and unassailable faith in God. Written with Allen Rucker, Randy Owen’s Born Country is both a fascinating look inside the phenomenon and a moving portrait of an extraordinary life enriched by traditional Christian values

For over twenty-five years Randy Owen was the front man and lead vocalist of Alabama, one of the most prolific groups in the history of music and the biggest country music group of all time. The band has had twenty-one gold, platinum, and multiplatinum albums and forty-two number one singles, and has sold more than 73 million albums. In November 2005, Randy and his Alabama band mates received country music's highest honor when they were inducted into the Country Music Hall of Fame. Randy's first solo album, One on One, released in November 2008.

An award-winning writer for television, author of nine books of nonfiction and humor, and columnist for Ability Magazine, Allen Rucker has written three books on the HBO series The Sopranos, including the #1 New York Times bestseller, The Sopranos Family Cookbook. He lives in Los Angeles.

“There’s probably not one artist in all of country music that has emerged in the last twenty years that wouldn’t count Randy Owen as a musical hero or an artistic influence, including me. Producing his first solo album was a career milestone for me.”
— John Rich, founding member, Big & Rich

“Randy Owen’s story is a fascinating one. He is a true gentleman, armed with an unassuming attitude and a modest approach to life, coupled with enormous fame and success. Born Country is a great read!”
— Dick Clark

“How Randy Owen went from Fort Payne, Alabama to the top of the world is a beautiful story-one that can only happen in America. He is my hero.”
— Dale Morris, personal manager

“Many volunteers have chosen to support St. Jude because of Randy Owen. He charged the country music industry to support the St. Jude kids. Because of his generosity and determination, Country Cares for St. Jude Kids has been able to continue its life-saving work.”
— John P. Moses, chief executive office of ALSAC/St. Jude Children's Research Hospital

” Randy Owen was the lead singer of country music’s first supergroup, Alabama, playing an integral role in shaping the genre during the 1980’s. Owen’s had an interesting life so far, and this could only be the beginning chapter.”
— Country Standard Time

“[Born Country] shows [Owen] has a good heart, a good family and an incredible career that includes more than 73 million albums sold, 42 No. 1 country songs and a Country Music Hall of Fame induction.”
— Atlanta Journal-Constitution