The Cartoon History of the Modern World Part 1: From Columbus to the U.S. Constitution (Cartoon Guide Series) (Paperback) 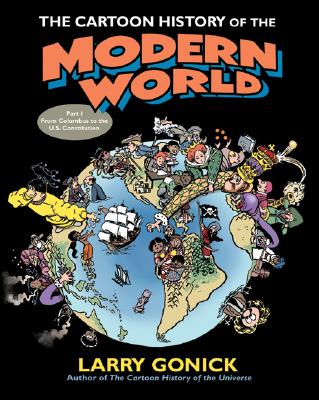 The Cartoon History of the Modern World is a wickedly funny take on modern history. It is essentially a complete and up–to–date course in college level Modern World History, but presented as a graphic novel. In an engaging and humorous graphic style, Larry Gonick covers the history, personalities and big topics that have shaped our universe over the past five centuries, including the Industrial Revolution, the American Revolution, the Russian Revolution, the evolution of political, social, economic, and scientific thought, Communism, Fascism, Nazism, the Cold War, Globalization––and much more.

Larry Gonick has been creating comics that explain math, history, science, and other big subjects for more than forty years. He has been a calculus instructor at Harvard (where he earned his BA and MA in mathematics) and a Knight Science Journalism Fellow at MIT, and he is currently staff cartoonist for Muse magazine. He lives in San Francisco, California.

"I first discovered your Cartoon History series when I was in fifth grade. I was hooked. My mom noticed my interest in history, and she asked if I would be interested in competing in the National History Bee. To prepare, I didn’t study. I didn’t read textbooks or historical studies. Instead, I just kept reading your books, over and over again, and I found myself leading most of the rounds. By the end of the night, I had earned a spot in the national stage of the Bee." — Freshman, Brown University