Turtle and Tortoise Are Not Friends (Hardcover) 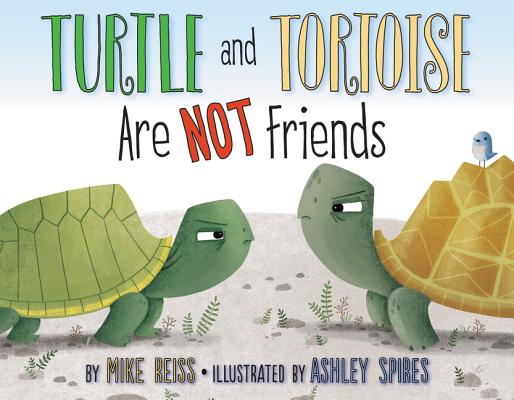 Two sworn enemies learn that they have more in common than meets the eye, and it’s never too late to make a new friend—even if it takes decades!

Ever since they were little hatchlings, Turtle and Tortoise decided that they’d forever be separated due to their different shells.

As years and years go by, the two reptiles stay on opposites side of the pen and embark on their own adventures, while holding an everlasting grudge. Until one day, Turtle and Tortoise get into a bit of pickle and need each other’s help!

This hilarious and heartwarming picture book from Merry Un-Christmas author Mike Reiss and The Most Magnificent Thing creator Ashley Spires is perfect for fans of unlikely pairs such as Frog and Toad Are Friends by Arnold Lobel, Duck and Bear from Jory John’s Goodnight Already!, and Boy + Bot by Ame Dyckman.

Turtle has a smooth shell.

Tortoise has a rough shell.

Goodness gracious! How can they possibly be friends?!

Mike Reiss has won four Emmys and a Peabody Award during his twenty-eight years writing for The Simpsons. He ran the show in Season 4, which Entertainment Weekly called “the greatest season of the greatest show in history.” In 2006, Reiss received a Lifetime Achievement Award from the Animation Writers Caucus. Reiss has written jokes for such comedy legends as Johnny Carson, Joan Rivers, Garry Shandling…and Pope Francis! For his comedic contributions to the charitable group Joke with the Pope, in 2015 Pope Francis declared Reiss “A Missionary of Joy.”

Ashley Spires is the author and illustrator of several children’s books, including the bestselling The Most Magnificent Thing and the Binky the Space Cat series of graphic novels, which is now an animated television series. Ashley lives in British Columbia, Canada, with her dog and her many, many cats. You can visit her online at www.ashleyspires.com.

“As the cityscape modernizes behind the zoo enclosure’s drama, it becomes clear that some things, from buildings to friendships, just take time.” — Publishers Weekly